The new movie from the genius Mr Wes Anderson is a winning cinematic concoction known as THE GRAND BUDAPEST HOTEL.

“Listen darling” – as a certain elegant gentleman would say – if you’re looking for a completely hilarious film to see right now, make it this delightful one. The gentleman in question is Monsieur Gustave H and the film is THE GRAND BUDAPEST HOTEL, writer/director Wes Anderson’s latest cinematic treat.

Ralph Fiennes is Gustave H and Tony Revolori is Zero

Gustave is the renowned concierge at the said establishment and as played by Ralph Fiennes with the sort of intricacy, energy and panache that are his hallmark, we have possibly Anderson’s finest movie yet. I had been so looking forward to seeing it, ever since watching the trailer after its premiere in Venice and it’s tremendous. The story of Gustave H and the hotel are intrinsically linked with Zero Moustafa, whom we first meet as an elderly man played with his usual spot-on brilliance by F. Murray Abraham. He’s staying at the hotel and catches the interest of another of the guests, Jude Law’s young writer – who we’ve also met as the older Tom Wilkinson in a delightful prologue where he explains how he came to write his most famous novel THE GRAND BUDAPEST HOTEL. It’s all a great example of the layers in every one of Anderson’s movies.

The writer is intrigued by Zero and they agree to have dinner so that Zero can recount his story and how he in fact came own the once gorgeous hotel, now decidedly modernised with only faint touches of its former baroque glory. And so events move back in time to the 1930s when the hotel was in its prime and everything inside it was presided over by its legendary concierge Gustave H.

Being taken on as a junior lobby boy in training, Zero (a wonderfully wide-eyed Tony Revolori) is mentored by Gustave and so begins their business partnership but more importantly, their friendship. However the sudden death – or could it be murder – of Madame D, one of the wealthy ladies that Gustave so diligently looks after at the hotel (played almost unrecognisably but fabulously by Tilda Swinton) sets in motion a chain of events that will make you howl with laughter and possibly near the end, shed a tear, as I did. 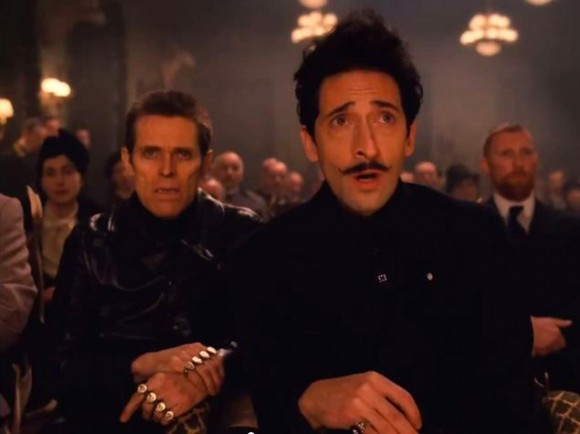 Willem Dafoe is Jopling and Adrien Brody is Dmitri

Anderson has packed his movie chock full of sumptuous actors and hair-brained scenarios – a priceless painting had been bequeathed to Gustave by Madame D in her will but her family, presided over by Adrian Brody’s wonderfully weasely son Dmitri doesn’t like that one bit, so sets out to do all it takes to get it back. But that means going through Jeff Goldblum’s sharply suave lawyer Kovacs, so Dmitri starts to play things mean setting his more than slightly menacing henchman Jopling (played superbly as always by Willem Dafoe) on Gustave and Zero’s trail; then before you know it, more bodies turn up, there’s a spell in prison – meeting Harvey Keitel’s kingpin Ludwig (a great cameo to match his one in Moonrise Kingdom), evading Edward Norton‘s super-efficient chief Henckels and his gang of policemen and eating some of Mendel’s delicious pastries on the way. I haven’t even mentioned Saoirse Ronan as Zero’s love Agatha and Bill Murray (no Anderson movie would quite frankly be complete without him) as a fellow concierge from another hotel Monsieur Ivan, who aids Gustave and Zero at a key moment. 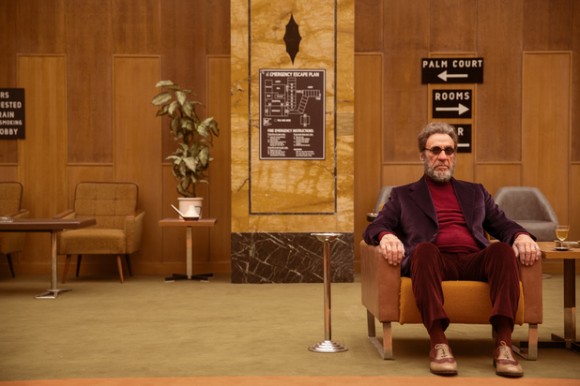 Moonrise Kingdom was one of my films of the year in 2012 and one of my favourites of Anderson’s illustrious career but this is really something else. How Anderson oh so beautifully balances the humour and at times real pathos in this movie (and all his work, I think) is one of the pleasures of going to the cinema for me. Like the Coen brothers, who sometimes use an eclectic array of sources for their films, Anderson has used the celebrated Austrian novelist Stefan Zweig as his inspiration here – one of the most popular writers in the world in the 1920s and 1930s but someone who wouldn’t be well known to many today. How nice that people having watched the movie may then want to discover Zweig’s works.

Some critics have made connections to The Shining in the expansive design and layout of the hotel itself and The Royal Tenenbaums in terms of this movie’s similarity to Anderson’s other work but the one I was reminded of most was Fantastic Mr. Fox – all that film’s rich detail, its quirkiness, deftness and vast ensemble is on display here.

Robert Yeoman‘s sumptuous cinematography also deserves a mention but it’s the magnificent Fiennes showing what a great comic touch he has that dominates the film. He and Anderson make a dynamite pairing and I for one would adore seeing them team up again in the future for another journey into this writer / director’s completely enthralling universe.

The Proposal is one romantic and deliciously guilty treat

Sicario: Day of the Soldado – it’s time for a return to justice

A new world awaits for the battle-scarred warrior Dheepan

The hunter finally meets the hunted in Zero Dark Thirty

Darkest Hour – a riveting and monumental piece of history

Breathe In – a superbly acted, intoxicating drama of connection

I think we’re going to love Lucy
Scroll to top