What a dazzling actor PHILIP SEYMOUR HOFFMAN was on screen – and what a terrible tragedy it is that all we have now are the performances he’s left behind.

It’s taken me a while to write this post. Hearing the news that PHILIP SEYMOUR HOFFMAN had died was a big shock. A lot of people have since given their comments on his sudden death and I couldn’t decide if I wanted to add my thoughts. But after spending the last week or so revisiting some of his incredible work, I must say something because I feel I’ve spent a lot of the last 20 years of his career watching him and I think it’s such a terrible tragedy that we won’t see him on screen anymore. 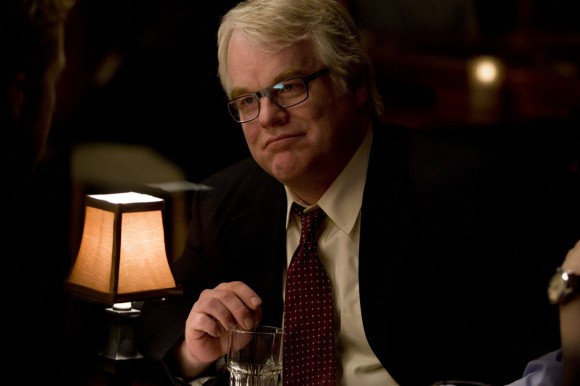 as Paul Zara in The Ides of March

I first saw Hoffman as George Willis Jr, the school bully in Martin Brest’s Scent of a Woman and what struck me most was the energy and depth of his performance – a privileged, upstart of a kid who seemed to channel his unhappiness at his lot in life, being the son of a wealthy businessman, into acts of rebellion. Amazing. But I soon came to realise that with a Hoffman performance, what you always got was the most nuanced, complex character, whatever the material.

After that, I noticed him in the slightly more commercial tornado adventure Twister and again his incredible cheery portrayal of the ebullient storm-chaser Dustin Davis lit up the screen and the movie. And then I saw him in Paul Thomas Anderson’s Boogie Nights and his heartfelt hanger-on Scotty J, so desperate and so in love with Mark Wahlberg’s character, was something totally different.

What a great actor I thought and every performance I saw from SEYMOUR HOFFMAN after that was equally dazzling. There was the prissy personal assistant Brandt in The Big Lebowski, the kindly nurse Phil Parma in Magnolia, the playboy Freddie Miles in The Talented Mr Ripley and the journalist Lester Bangs in Almost Famous, to the savage villain Owen Davian in Mission: Impossible III. He played the terrifically acerbic CIA agent Gust Avrakotos in Charlie Wilson’s War, the softly spoken Father Flynn at the centre of Doubt and more recently, the clever chief of staff Paul Zara in The Ides of March, the initially antagonistic but eventually wholly supportive baseball coach Art Howe in Moneyball, the terrifyingly composed Lancaster Dodd aka The Master and the shadowy games-maker Plutarch Heavensbee in The Hunger Games: Catching Fire.

What a body of work – stunning.

I haven’t even mentioned some of the great performances which I haven’t seen and now have to seek out – Sidney Lumet’s Before the Devil Knows You’re Dead, Charlie Kaufman’s Synecdoche, New York, The Savages opposite Laura Linney, Paul Thomas Anderson’s Punch-Drunk Love, Todd Solondz’s Happiness and Jack Goes Boating, the movie he directed and starred in following its successful New York theatre run.

But what I’ll always remember him for above all else, is his stunning Oscar-winning performance as the writer Truman Capote in director Bennett Miller’s 2005 magnificent drama Capote. His portrayal of one of the literary world’s most individual and striking talents was quite simply sublime. He had met Miller at NYU’s Tisch School of the Arts and they’d become friends.

Perhaps that friendship is what made this particular piece of work so rich because Hoffman certainly wasn’t anything like the real Truman physically but such was the greatness of his performance, you believed completely that the slight and unusually spoken gentleman before you on screen was a spot-on incarnation of what Capote was really like. That’s great acting and that was PHILIP SEYMOUR HOFFMAN did, seemingly so effortlessly.

When a deal is make or break, who can you trust in A Most Violent Year?

See the L.A. streets from the End of Watch point of view

The little horse that most defintely could is Seabiscuit

Parasite is a fascinating satire on class, greed and desire

The cost of violence is seen in a masterpiece called Unforgiven