Jake Gyllenhaal delivers a mesmerising performance in writer/director Dan Gilroy’s dark drama NIGHTCRAWLER making it one of the movies of the year.

Like I said in my post about the film’s incredible teaser trailer a couple of months ago, I thought Jake Gyllenhaal and a dark story about crime journalism in Los Angeles would make for riveting viewing and how right I was. NIGHTCRAWLER, written and directed by Dan Gilroy, is an outstanding debut feature and one of the best movies I’ve seen this year. This is a drama that not only contains one of the most original and fascinating characters I’ve seen on film in a long time but also a mesmerising, standout performance from its star Jake Gyllenhaal.

We first see Gyllenhaal’s Louis Bloom trying to sell stolen industrial equipment to make ends meet. What you immediately notice when watching him barter the price of a manhole cover with a building site foreman is this is a well-read, intelligent young man, one who sounds like he knows his market and can list reasons why buying from him makes sense. What’s also apparent is his drive, his commitment and his terrier-like focus on the task at hand. Driving back home, he pulls over near a crash at the side of the freeway when he sees a man with a video camera rushing to film the police as they try to extract a woman from her car.

When he asks Joe Loder (a superbly gruff Bill Paxton) what he’ll do with the footage, he’s told it’ll be sold to whichever local new station pays the most “If it bleeds, it leads” Joe says as he disappears into the night. Having watched Lou silently take these events in, you just know he’s found a new avenue for his talents. Once a camcorder is ingeniously purchased, Lou proceeds to learn what it takes to be a ‘NIGHTCRAWLER’, showing up at crime scenes and filming whatever may be of interest – and the more horrific, the better.

This leads Lou to his two core relationships in the film – Rick, an unemployed twenty-something he hires as his assistant and played with desperation and vulnerability by the amazing Riz Ahmed; and Nina, the producer of a low-end local cable tv news station, no less desperate to find stories that will pull in the viewers and played by the wonderful Rene Russo as a determined, self-assured career woman. Both meet their match in Lou and as he starts to break the stories that make the headlines, each one more grisly (and more successful) than the last, the more this impacts on those relationships and we watch as his morals slowly slip away, wondering at times if he even had any, to begin with. 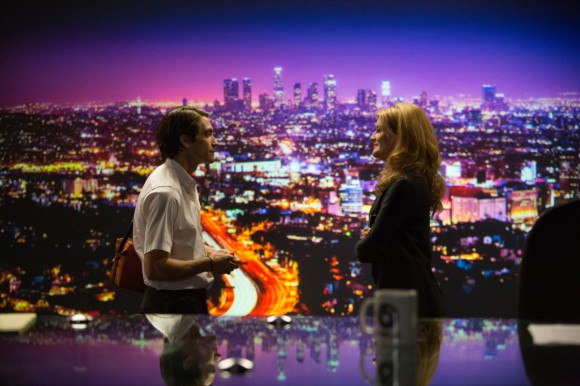 Gyllenhaal with Rene Russo as Nina

What Gilroy has done here is to create a thought-provoking drama driven by the main character who constantly overwhelms you – just when you think you know what makes Lou tick, something happens to reveal another darker layer. Gyllenhaal has said in an interview that the film highlights how our society is now in a place where “important information has become unimportant and unimportant information has become important” and this is terrifically illustrated in the media feeding frenzy environment we’re shown here.

Gilroy’s previous work as a screenwriter, most notably partnering with his older brother Tony on The Bourne Legacy, hasn’t really prepared you for the powerful piece he’s put together here and I look forward to whatever he comes up with next. The cinematography by the brilliant Robert Elswit has been mentioned in the same breath as Dante Spinotti’s in Michael Mann’s Heat, because its shots of Los Angeles predominantly at night, show freeways alight with glittering streams of cars and the iconic palm trees are majestically silhouetted against the early evening sky, giving the city a beautiful and really haunting feel.

Then there’s the acting. Ahmed, Russo, and Paxton are all excellent but for me, Gyllenhaal delivers, alongside Steve Carell’s extraordinary portrayal in Bennett Miller’s Foxcatcher, the acting performance of the year. He and Carell had both better be nominated in the ‘Best Actor’ category at next year’s Oscars or I’ll be very annoyed indeed. Having worked on so many almost iconic roles in his movies to date – Donnie Darko, Jarhead, and End of Watch must be mentioned – Gyllenhaal reaches a career-best here and bravoes to Gilroy for providing him with such a memorable character to inhabit.

There are times in NIGHTCRAWLER when you might want to turn away from the disturbing images that are presented to you but you won’t want to take your eyes off Gyllenhaal, whose brilliant portrait will linger long in the memory after the movie is done.

The world needs to know the name Richard Jewell

Inside Llewyn Davis has everything in perfect harmony

What happens when the music stops in Margin Call

What’s in store with the summer 2012 blockbusters?

What a twisted web is woven in Gone Girl