The dynamite Joe Pesci, an Oscar-winning Marisa Tomei and the incomparable Fred Gwynne all add up to laughs by the bucketload in the brilliant comedy MY COUSIN VINNY.

You’re on vacation before starting college, driving through the South with your New Jersey best bud and then bang! a stop at a convenience store winds up in you both being arrested for murder, thrown in jail and if you’re convicted, a long, unpleasant sentence is stretching ahead of you – or maybe something even worse. But you’re innocent! When the chips are this down, who you gonna call? MY COUSIN VINNY that’s who!

For Ralph Macchio’s William Gambini that’s the best and only option because Vinny Gambini (an absolutely pitch-perfect Joe Pesci) took the bar and is a lawyer right, so no problem? He’ll come down and sort this whole mess out – of course, he will. There’s just the small problem that Vinny isn’t a trial lawyer and doesn’t really know court procedures but he’s tenacious and what’s more “no one pulls the wool over the eyes of a Gambini!” Maybe they have a shot. 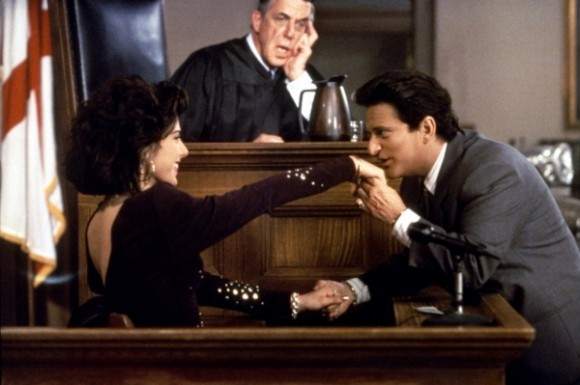 So the dapper New Jersey Italian-American Vinny arrives in Alabama with his girlfriend Mona Lisa Vito – played with a gorgeous brassy spirit and an even more gorgeously outrageous wardrobe by Marisa Tomei – who’s come along to give moral support and they couldn’t be more out of place. Tomei won the ‘Best Supporting Actress Oscar for her performance and it’s a doozy.

A major problem for Vinny though is the judge who’s going to preside over the trial. He’s the fearsome Chamberlain Haller – a fabulously grouchy Fred Gwynne “What is a yute?” – so the odds are definitely not in their favour. But with Vinny’s positive outlook to win this case, aided by Lisa, what could go wrong?

5 am trains, an incredibly loud sawmill whistle, owls, mud, slow dry cleaners, a formidable sheriff, incriminating tyre tracks at the scene of the crime, bar guys wanting a fight, a prosecutor with a love of hunting and a witness who saw the whole thing.

Possibly as William’s best friend Stan (Mitchell Whitfield) suggests they should go with the public defender John Gibbons, an impressive-looking Austin Pendleton? Or maybe not – you’ll see why. In any case, Vinny will need all his wits about him, as he’s up against the wily Lane Smith as his opposing counsel and stern Bruce McGill as the town sheriff. Perhaps though, if Vinny is paying attention to how long grits are cooked and utilises a certain girlfriend’s dynamite automobile knowledge, the case really could be won.

What’s certain is along the way is that you’re guaranteed a hilarious fish out of water journey courtesy of British director Jonathan Lynn, who steered the hugely successful British TV series’ Yes, Minister and Yes, Prime Minister, so knows a thing or two about character comedy and Dale Launer’s very witty script. It’s all delightful and as newly-minted now as when it came out in 1992, so make the smart move and choose MY COUSIN VINNY if he’s passed you by – you won’t regret it.

Battle of the Sexes looks a gripping game, set and match

The Proposal is one romantic and deliciously guilty treat

Megamind is a megatastic voiced animated treat from Dreamworks

Isle of Dogs is a glorious animated creation from Wes Anderson

Up is quite simply the greatest animated movie ever

Captain Phillips could steer this drama into Oscar waters

For stunningly relevant sci-fi, journey to Elysium
Scroll to top