Whenever someone’s mentioned that a film role is an ‘everyman’ it’s usually played by Tom Hanks but I now think the new person to call in is the superlative MATT DAMON.

There is a new everyman in town and his name is MATT DAMON.

I first saw DAMON in the Oscar-winning drama Good Will Hunting. I think he came into a lot of people’s consciousness with that movie, co-writing and starring in it with best friend Ben Affleck. But I have to say that although he was the showier title part of the blue-collar maths genius, I recall being more impressed by Affleck’s brilliantly understated portrayal of die-hard friend Chuckie at the time. There was something very dazzling but rather distancing in Damon’s performance and even though you rooted for his Will Hunting to succeed, I couldn’t somehow warm to him as a performer and so regardless of the film’s success, I wasn’t a fan of his work – that came later.

Damon followed that movie by starring with Tom Hanks (in one of his finest ‘everyman’ portrayals) as the titular soldier in the peerless Saving Private Ryan and with his recent Oscar triumph for the Good Will Hunting screenplay and his and Affleck’s story of two Boston boys being the toast of Hollywood, Damon was the perfect choice to play the young man who Hanks and his team must find and rescue. Given the subsequent Academy glory that Damon enjoyed, Steven Spielberg’s clever piece of casting was indeed prophetic.

I then caught some of his performances after Ryan in films such as Rounders. Holding his own against card sharp John Malkovich and Rizzo-like best friend Edward Norton was no mean feat. There was The Talented Mr Ripley, where he was chilling as psychopath Tom Ripley beguiling Jude Law’s captivating rich boy. And then he was just totally winning as thief Linus Caldwell in Steven Soderbergh’s caper Ocean’s Eleven. Perhaps the tide was turning, because around this time I saw him in the supporting role of Ilario, part of Meg Ryan‘s crew in the Iraq drama Courage Under Fire and as impressionable lawyer Rudy Baylor, alongside a tremendous Danny DeVito, in the Francis Ford Coppola version of John Grisham’s The Rainmaker – both made before Good Will Hunting – and his performances really made an impression on me. Here you had portrayals of specificity, power and above all, nuanced subtlety.

Damon as Jason Bourne in The Bourne Identity

And then there was a certain Jason Bourne. That’s the role that really changed things for me, where I sat up and thought, this guy is terrific, he’s an extremely talented actor. Doug Liman’s often underrated version of The Bourne Identity (in light of the two admittedly bravura successors by Paul Greengrass) and the first in what proved an incredibly successful series following Robert Ludlum’s famous assassin, contained a masterstroke in casting Damon.

Here was a role combining his oft-used persona of intelligence with his hitherto not really explored the physical side and the result was absolute dynamite. His Jason Bourne, struggling with amnesia to make sense of who he is and then not really liking what he finds, was a thrilling, supremely entertaining journey and Damon’s performance – strong but vulnerable, smart, yet still with the capacity to learn (particularly when with the luminous Franka Potente) – was a key part of its enormous success.

After that, whatever he did that I managed to see, I thought was brilliant. As Bourne again in the remaining two movies of the trilogy, The Bourne Supremacy and The Bourne Ultimatum. He was Wilhelm Grimm, opposite Heath Ledger, in Terry Gilliam’s original take on fairy tales The Brothers Grimm. There was Bryan Woodman in Stephen Gaghan’s multi-layered oil drama Syriana. And Colin Sullivan, the Boston criminal turned cop in Martin Scorsese’s very violent but also gripping crime saga The Departed. He was Edward Wilson, opposite Robert De Niro and Angelina Jolie, in the beginnings of the CIA tale The Good Shepherd. A pudgy Mark Whitacre, the whistleblower in Steven Soderbergh’s wacky black comedy The Informant! The iconic Francois Pienaar in Clint Eastwood’s terrific recreation of the landmark South African rugby world cup Invictus. He was Miller in the sharp WMD thriller Green Zone that reunited him with director Paul Greengrass. The beleaguered father Mitch Emhoff, part of a cracking ensemble in the disturbing morality tale Contagion, courtesy of Soderbergh again. The gorgeously cuddly dad Benjamin Mee, in Cameron Crowe’s We Bought a Zoo. And currently as Max, the tortured, tragic, good-hearted thief in Neill Blomkamp’s knockout sci-fi thriller Elysium.

There are the DAMON performances I’ve missed of course and need to catch. He’s George Lonegan in Clint Eastwood’s psychic drama Hereafter, which received a pretty bad critical reception on its release but with a cast including Bryce Dallas Howard and Cecile De France surely should be seen. As does the up-and-coming politician David Norris in the futuristic and visually bold love story The Adjustment Bureau with Emily Blunt, where he worked with George Nolfi, the screenwriter of The Bourne Ultimatum on his first film as director. He’s playing the title character and teaming up with Ocean’s co-star Casey Affleck in Gus Van Sant’s buddy flick Gerry. And, most notably, as conflicted salesman Steve Butler in the recent fracking tale Promised Land (which he also co-wrote) and as Scott Thorson, the lover of Michael Douglas’ Liberace in the amazing (Soderbergh again) Behind the Candelabra. 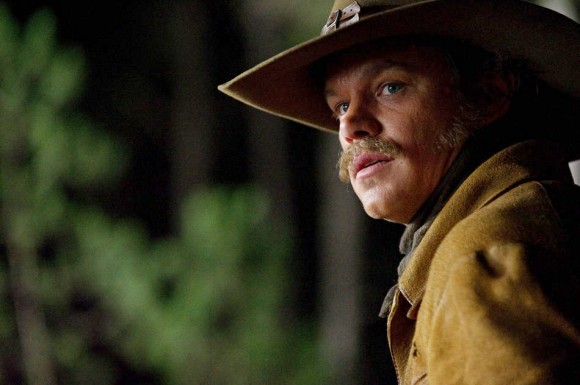 Damon is a memorable LeBoeuf in True Grit

But then for the ones I’ve yet to see, there’s the career-best performance that I have. For me, that’s as LeBoeuf, the initially egocentric but eventually honourable Texas Ranger in the Coen brothers awesome retelling of True Grit. With Jeff Bridges masterful incarnation of Rooster Cogburn on one side and Hailee Steinfeld’s mesmeric debut as Mattie Ross on the other, you needed an actor of complexity and presence to make the film really fly and you got it with Damon’s pitch-perfect performance. When he and Mattie part, it’s one of the high points of the movie and is guaranteed to cut you to the quick.

It perhaps also distils for me that Damon’s now hit a real purple patch as an actor, where the success of the Bourne movies have given him the freedom to explore roles that challenge him and allow him to explore an extremely varied range of characters – ones that include the ‘everyman’ tag, where a character can live or die and burn themselves into your consciousness because you identify with them, they are just like you.

He’s yet to win an Oscar for his acting – he should have won one for his performance in True Grit in my opinion – but maybe it’ll be on the cards when he and Ben Affleck reunite for what’s bound to be a juicy and spot-on biopic of Boston gangster Whitey Bulger. There are also upcoming roles in the stunning ensembles of the George Clooney directed World War Two art story The Monuments Men with Clooney, Cate Blanchett, Jean Dujardin and Bill Murray and Christopher Nolan’s science fiction movie Interstellar, alongside Anne Hathaway, Jessica Chastain, and Matthew McConaughey.

So I certainly think there are more ‘everyman’ roles on the horizon we have to look forward to from the superb Mr MATT DAMON.

The cost of violence is seen in a masterpiece called Unforgiven

Something stunning this way comes with Macbeth

There are character actors and then there’s Peter Sarsgaard

Stronger is a hymn to an incredible hero called Jeff Bauman

When it’s brother versus brother who will emerge the Warrior?

The superheroes reassemble for Avengers: Age of Ultron
Scroll to top