She’s the greatest actress in cinema today and her name is MARION COTILLARD.

It’s a bold statement – the greatest actress in cinema today – but I think it fits perfectly when you talk about MARION COTILLARD. Whilst Meryl Streep will always occupy a special place in any list of wonderful actresses, as would Cate Blanchett or Katharine Hepburn, for me, COTILLARD is now at the very top of this field and to explore why let’s take a look at her illustrious career to date.

From my first glimpse of her in Ridley Scott’s A Good Year, where she played the evocatively named Fanny Chenal, I was bowled over by her brilliance. “And you tried to run me over with your little car” she glowers at a mesmerised Russell Crowe. He wasn’t the only one.

Following on swiftly from that, was the role with which COTILLARD really stormed into the attention of the international film-going audience, as Edith Piaf in Olivier Dahan’s La Vie en Rose. What a role and what a performance – I think she won pretty much every award going for that visceral portrayal of the iconic singer and quite rightly so. She embodied a woman who, for the most part, was not all that likeable (demanding, shrill and opinionated to name a few of Piaf’s traits) but whose talent made you forgive all of those characteristics. The scene in which she is given some tragic news laid the foundations for me for many of her subsequent dramatic performances – her skill in displaying poleaxing emotion. Quite magnificent.

Since then, I’ve tried to catch everything she’s done – from her work with her partner, the actor/director Guillaume Canet in the ensemble drama Little White Lies (often referred to as ‘The French Big Chill’) as the damaged Marie and in the American thriller Blood Ties as the drug-addict Monica; to her brace of work with one of my favourite film-makers Christopher Nolan, in his mind-bending, dazzling Inception as the conflicted Mal and his final Batman film The Dark Knight Rises as the forthright Miranda Tate. 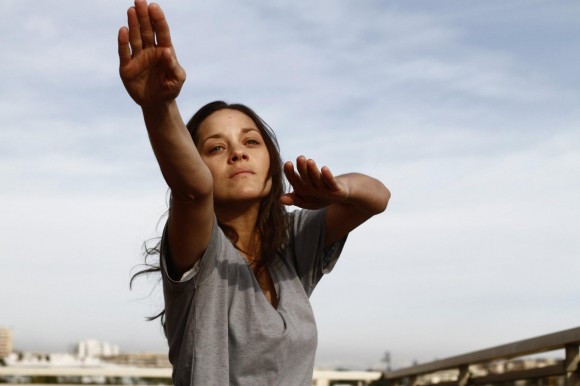 Cotillard is brilliant as Stephanie in Rust and Bone

But La Vie en Rose aside, it’s her work in two French movies that for me define her brilliance – Jacques Audiard’s devastating love story Rust and Bone and the Dardenne brothers quietly overwhelming drama Two Days, One Night. They both made my films of the year lists in 2012 and 2014 respectively and her performances in them are luminous.

As Stephanie, the proud and somewhat selfish whale trainer in Rust and Bone, who suffers a horrific accident and falls apart but is then is saved by her relationship with the tortured Ali (played completely wonderfully by Matthias Schoenaerts) once again illustrated just how superb she is when conveying really painful emotion – the scene in the hospital when she is visited by her friend and told of the severity of her injuries, puts a lump in your throat, which then later turns into triumphant tears as she faces who she has now become and helps Ali out of his own struggle in the process.

Cotillard’s luminous portrayal as Sandra in Two Days One Night

And then as Sandra, the factory worker trying to return to work after a bout of depression in Two Days, One Night, she delivered possibly her finest performance of her career to date. Slightly scrawny-looking, with hardly any make-up and dressed for the most part in jeans, cowboy boots, and nondescript vests, she blazed across the screen. This time, starting from a place of fragility and low confidence, we watch spellbound as little-by-little, she regains her self-respect.

It shows you how the smallest of dramas can make such a big impact on you emotionally, as you watch Sandra go from door-to-door visiting her fellow workers to see if they will stand by her or vote she should be let go. You’re absolutely gripped until the film’s denouement and it’s all down to COTILLARD and that great face of hers, as even the tiniest of reactions flicker across her features and you wait on the edge of your seat to see what follows.

Recently, she met Michael Fassbender dynamically head-on as the emboldened but ultimately tragic wife in Justin Kurzel’s visually arresting Macbeth. The scene after they have both been crowned king and queen, where he tries to manipulate her with his new-found power and she defiantly resists, was the movie’s high point for me. You feel there is no vanity whatsoever in her portrayals and this is shown again impressively here as by the time you reach the “Out, damned spot” scene, her Lady Macbeth has been stripped of all her jewels and authority to inhabit the plainest of dresses and her face has become a deathly pale mask of her former self.

But there’s one film of hers I’m desperate to see and which bizarrely never got a release in the UK, either in the cinemas or on DVD – James Gray’s The Immigrant. I remember being blown away by the evocative trailer where we see COTILLARD’s Polish refugee Ewa Cybulska embark at Ellis Island for a new life in turn of the century America, only to be caught up in Joaquin Phoenix’s dangerous business dealings and pulled between him and Jeremy Renner’s vaudeville magician. Every frame looked so stunning but then it would, because it was courtesy of one of my favourite cinematographers, Darius Khondji, and the movie’s critical response mentioned it in the same breath as Roberto Rossellini and Elia Kazan. Apparently, the only way I can see the film is to track down a copy in America. I’d better get on with that.

So there you have it. Why I think she’s the greatest and if you still need convincing of her mind-blowing talent, watch the movies I’ve mentioned and I think you’ll agree that MARION COTILLARD is an actress extraordinaire.

Putting everything on the line in The Pursuit of Happyness

Dolemite Is My Name sees Eddie Murphy back in dazzling style

Get ready for Joaquin Phoenix’s Joker to astonish us

Joaquin Phoenix – you’re so good at what you do