You know who I am – Robert Downey Jr. is Tony Stark

The signs were great from the trailers but when you come away from a movie so totally gobsmacked and breathless with its sheer inventiveness, wit and storytelling, that’s a good time and that’s IRON MAN THREE.

With a career-best performance from Robert Downey Jr. as the brilliant Tony Stark (I didn’t think he could his better the one he gave in The Avengers but there you go!), collaborating superbly with his old pal, writer/director Shane Black (from 2005’s action comedy Kiss Kiss Bang Bang) they have delivered not only the most successful of the three Iron Man movies to date – passing the $1 billion mark in 24 days – but also the best, most audacious action movie of the year.

Having been part of ‘The Avengers Initiative’ has taken its toll on Tony and we find him, at the start of the film, talking out his problems via voiceover to an unseen person to try and map back where things changed for him. Cue a Y2K opening sequence, with the brief and very clever arrival of a future friend and the set up for the events that will unfold a dozen years later in the present. There’s no Pepper Potts around, her place is taken by Rebecca Hall‘s Maya Hansen, a super-brainy biotechnologist who Tony is flirting with. And then Guy Pearce turns up as a very geeky scientist called Aldrich Killian who is trying to crash Tony’s New Year’s Eve party to tell him what he’s working on. But as Tony is more interested in Maya than some oddball, you just know that if he does ignore Killian, the decision will come back to haunt him. 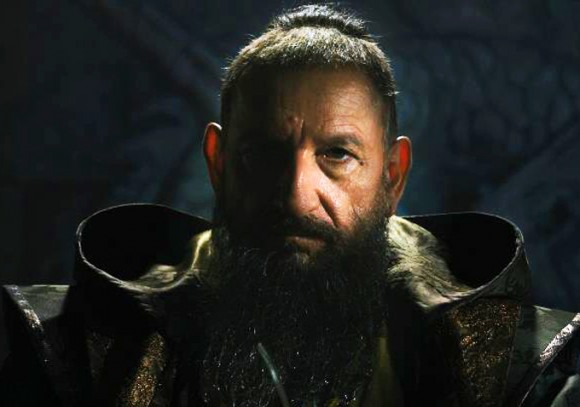 Ben Kingsley is The Mandarin

And so it does.

Events go from bad to worse for Tony back in present-day, post-Avengers New York escapades world. Serious trouble sleeping, escalating to panic attacks, his relationship with Pepper hitting a really rough patch, all culminating in the arrival of The Mandarin, an absolutely terrifying terrorist who is determined to destroy everything in his path. Ben Kingsley’s preacher-like, self-confessed freedom fighter is not unlike that other famous most-wanted man we used to know and with a series of attacks and home-made videos to extol his cause, we’re in a version of very real present-day events that are almost uncomfortable to watch.

So, Tony throws down a challenge to The Mandarin to come and get him if he dares and before we know it, he has Captain America’s statement from The Avengers ringing in his ears – “Big man in a suit of armour. Take that off, what are you?” Tony finds out and in the course of his journey, goes back to basics and re-builds his life. He’s mostly helped in this by a 10-year old kid named Harley. Oh no, you’re thinking, this could be mawkish and bad, having a kid in the film. Oh no! Harley is played perfectly with razor-sharp wit and very winningly by Ty Simpkins and he bounces brilliantly off Robert Downey Jr.’s always acerbic Tony, creating one of the high points of the movie. And once Iron Man gets his groove back, it’s time to take on The Mandarin. But perhaps Tony has underestimated this villain and he and we are about to witness that audacious element I mentioned at the start. Wow.

All this adds up to show what a great decision it was that Downey Jr. suggested his old friend Shane Black take over the directing of the series with this movie. I think it’s pretty rare when the third film in a franchise can do something quite as fresh and innovative as this. Being more a comics admirer than a reader, I think it also displays what I often believe comics can do so well – create a fantastical premise and then show that with gritty reality and counterpoint it with real humour – and that’s absolutely what’s happened here.

Drew Pearce and Shane Black’s screenplay is superbly sharp, funny writing, delivered by Downey Jr. together with a great cast. Gwyneth Paltrow as Pepper and Don Cheadle as Rhodes both step up to the plate with more to do in this film and do it terrifically. Guy Pearce gives us all fabulous, dangerous charisma and James Badge Dale shows a very cool, mean streak as Killian’s henchman Savin. Rebecca Hall is a nice, quirky foil to Pepper, Ty Simpkins is (as mentioned) top, and watch out for a fantastic Adam Pally who does a truly memorable cameo as Gary the cameraman. Last, and by no means least, the great Ben Kingsley is simply stunning.

IRON MAN THREE is put together with such freshness, pizzaz and downright boldness by Black that it’s set the bar high for the rest of the blockbusters this year to meet and makes you wish more movies could be this supremely entertaining. Two things get a special mention. Danny Yount’s gorgeous split-screen, end title sequence, tipping its hat to the comics and matched every frame of the way by Brian Tyler’s catchy, jaunty score is a fitting way to possibly finish off this chapter of Tony Stark’s adventures; and if you want to know who Tony is telling his story to, stay right to the end of the credits and you’ll see.

Beyond that, heck, I think I’ll just have to go and see it again!

The contest of the summer 2011 blockbusters has begun

Let’s hear it for Captain America: The First Avenger

“Whatever it takes” you can’t miss Avengers: Endgame

“Now, shall we begin?” set phasers to stun for Star Trek Into Darkness

Interstellar really makes you want to reach for the stars

Star Trek Into Darkness strikes back

‘So fare thee well my own true love’ heralds Inside Llewyn Davi...
Scroll to top