Ralph Fiennes’ second film as director, THE INVISIBLE WOMAN, is a haunting and magical tale that will really move you.

Felicity Jones is superb as Nelly Ternan, ‘The Invisible Woman’

I’ve admired Ralph Fiennes so much as an actor through all of his incredibly varied and visceral screen performances and though his second film behind the camera is the Victorian-set drama THE INVISIBLE WOMAN, it’s a no less visceral experience.

Even though Fiennes also acts in this, as a middle-aged Charles Dickens at the height of his fame, the real star here is the amazing Felicity Jones as THE INVISIBLE WOMAN of the title. She’s Ellen Ternan, “Nelly”, one of the actress daughters of Kristin Scott-Thomas’s Frances Ternan making their living in touring theatre in 1850s Britain. Coming into contact with Dickens for a play he’s producing with his writer and friend Wilkie Collins (an always excellent Tom Hollander), it’s a transformative moment for both of them but in Fiennes superbly accomplished film, everything is subtly nuanced and beautifully underplayed.

The thought of Nelly embarking on a relationship with the famous writer would not only ruin her reputation but also his marriage to Catherine (a quietly formidable Joanna Scanlan) and we watch all these momentous thoughts flicker across Jones’ expressive face. She really is an actor of incredible talent. Having been blown away by her performance opposite Guy Pearce in Drake Doremus’ recent romantic drama Breathe In and enchanted by her turn in the 2011 romantic comedy Chalet Girl, here she delivers a mature and emotionally focused portrait of a woman trapped in both a relationship that fulfils her and within the constraints of the time. 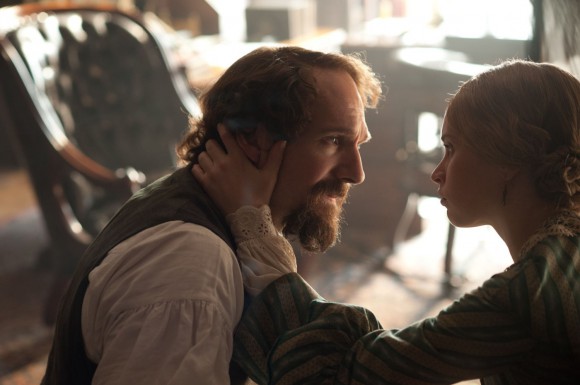 Ralph Fiennes (with Jones) is fantastic as Charles Dickens

It’s in the framing of shots that Fiennes the director, working with cinematographer Rob Hardy, where I felt an example of how much he’d grown in boldness from his debut feature to this. They are perfectly chosen, giving an amazing sweep and scope to the movie. The pacing of the film is also finely judged, moving between the development of Dickens and Ternan’s relationship and scenes from her life in Margate 20 years later with Tom Brooke’s softly-spoken schoolteacher. Both are equally affecting and create a tension that’s as gripping as any thriller.

It’s also here in these later scenes that Nelly strikes up a friendship with a caring, local priest played by John Kavanagh, who can tell something enormous has happened to this seemingly-collected young wife years before. He works out who she is and becomes her confidante, remarking how wonderful it must have been to be so close to a man whose work was described as ‘haunting and magical’. That closeness came at a high price though and the shots of Jones being lost in a moment of remembrance for what her life used to be, are like a shot to the heart.

Fiennes has created a hugely accomplished film here following his first film as director, the modern Balkan-set adaptation of Shakespeare’s Coriolanus in which he also starred. It’s also terrific to see him again alongside his co-star from the Oscar-winning The English Patient, the wonderful Kristin Scott Thomas who delivers a spot-on performance as Nelly’s protective mother Frances.

As Dickens, Fiennes is both a powerfully commanding and, at times, a more hidden presence, almost pulling back to leave the focus squarely on Jones. When you have two actors who can produce this level of raw emotion, about a time when feelings were more often than not kept in check, you have a film that slowly and simply begins to exert its pull on you and that leaves you quietly devastated at its conclusion.

The Report will uncover some very dangerous secrets

Gravity truly brings the wow factor back to cinema

Seeking out the truth means you are The Fifth Estate

In Avengers: Age of Ultron “There are no strings on me”
Scroll to top