Following the superb first film was never going to be easy but THE HUNGER GAMES: CATCHING FIRE is a brilliant sequel.

Francis Lawrence certainly had his work cut out. Taking over the helm of THE HUNGER GAMES from the series’ first director Gary Ross, whose superb style of story-telling helped make it a winner (and over $600 million at the box office) but with THE HUNGER GAMES: CATCHING FIRE, Lawrence has fashioned a quite brilliant sequel. I wondered if it was a good omen when his appointment was announced – sharing a surname with his stellar leading lady Jennifer Lawrence. And although he’s no relation to his Oscar-winning star, with the stylish I Am Legend as one of his previous films, he seemed like a great choice which has now been soundly proved. The movie is already storming ahead in box office revenue and successfully navigating the tricky plot of Suzanne Collins’ second book in the trilogy, which includes a return to the killer games arena and could so easily have seemed like a re-run of events. 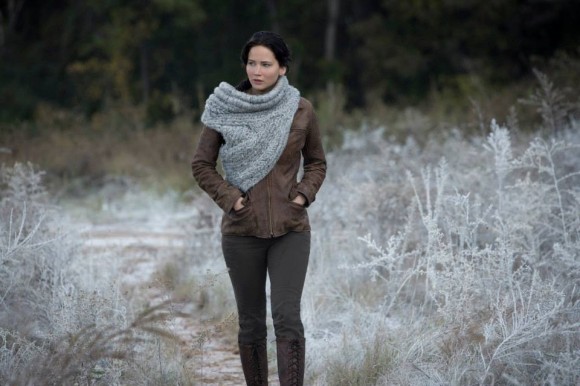 That success is certainly due in no small part to Jennifer Lawrence and her spellbinding turn as the heroine Katniss Everdeen, around whom everything and everyone circles. She’s now an Oscar winner following her ‘Best Actress’ award for last year’s Silver Linings Playbook and her director is smart enough to know what a draw she’s become and so her face appears in almost the first frame of the movie and then there’s a wonderful lingering shot on her to finish it.

Lawrence’s Katniss is a truly accomplished portrayal of a formidable young woman pushed and pulled at every turn by forces beyond her control but who starts to realise over the course of this film, how she may have the will to control and defeat them. Lawrence really builds on her spirited performance in the first movie and watching her in this one is to witness an assured, effortless display of great acting. She certainly is one of the most compelling screen presences right now.

So having survived The 74th Hunger Games as much by chance as by ingenuity, Katniss and her fellow District 12 tribute Peeta Mellark (the terrific Josh Hutcherson) now face the victory tour around all. As captivated as the audience was for their win, they are equally fascinated that these two young, new-found celebrities are in love and so the chance to see them in the flesh as they visit each district is not to be missed. This fascination is wonderfully and subtly done as the parallels with modern celebrities and the obsessive hunger of the media for them are scarily clear.

But of course, Katniss’ victory has also had another effect on the populace of Panem – it has ignited the stirrings of rebellion against President Snow (a chillingly composed Donald Sutherland as ever) and his brutal regime. From Katniss’ newly emboldened sister Prim (Willow Shields) inspired by her older sister’s actions and who talks of the hope that Katniss has given everyone, to her love Gale (Liam Hemsworth) who tells her of how the people want her to fight, our heroine soon sees that every speech and action she makes is not just publicity or part of a game but of an even more dangerous real life that she thought.

Katniss and Josh Hutcherson’s Peeta are bound together

Of course, Snow has to quash these thoughts of rebellion quickly and decisively and so he cleverly invokes the Quarter Quell in The Hunger Games’ 75th year (neat timing as it only happens every 25 years) where the remaining victors from any previous games must all fight each other again until only one is left standing. And in order to make sure things go to plan, he enlists the help of a new games-maker in the shape of the softly spoken and shadowy Plutarch Heavensbee, played to an absolute ‘T’ by Philip Seymour Hoffman.

He’s one of a number of notable additions to the cast that also sees Jeffrey Wright, Jena Malone and Sam Claflin join as major new characters. So it’s back to the arena for Katniss and Peeta and while I won’t reveal any more of what they have to face, I can say it makes their relationship even more intriguing to set up the final part of the trilogy, with some clever twists and turns in these new games that if you haven’t read the book, will keep you guessing as to how it’s all going to turn out.

Behind the scenes, Jo Willems’ cinematography gives a real epic quality to the proceedings, particularly with the use of IMAX as Katniss enters the new arena and everything zips along at an exciting and well-judged pace courtesy of Francis Lawrence in the director’s chair. He does have to thank Ross though for his original casting choices and of the returning ensemble, although they have a smaller part to play this time around, Stanley Tucci as the Games ‘ chat show host Caesar Flickerman in all his toothy, manic glory and Woody Harrelson as ex-Games victor, turned very useful mentor Haymitch with his trademark wry humour are very welcome indeed.

What really struck me in THE HUNGER GAMES: CATCHING FIRE was the moments of defiance that were built up so effectively – the flash of artwork in a tunnel that shows Katniss’ lucky pin, the words ‘The odds are never in our favor‘ as graffiti on a wall and the people all doing that iconic salute to Katniss and Peeta for what they stand for. But although that spark of unrest seems to signal new beginnings, it’s at a cost because we then watch the killing of an innocent man for supporting them. And let’s not forget that Mockingjay whistle, that’s both powerfully eerie and a call to arms. It really does stay in your head long after you’ve walked out of the movie and I’m already looking forward to whistling it again when Julianne Moore joins the fray for part 1 of the final book, MOCKINGJAY which we’ll see in just under 12 months from now.

In Killing Them Softly, you need to watch your back

She’s coming back – The Girl with the Dragon Tattoo

Darkness and light are powerful forces in Star Wars: The Last Jedi

When a dream is this terrifying you need to Take Shelter

Secrets to discover in Star Wars: The Force Awakens

Headhunters is the new superbly gripping game in town

JSHmoviestuff Review of 2013: “Reminds me of a story”

It’s all about more, more, more for The Wolf of Wall Street

Much Ado About Nothing? Quite the opposite for Joss Whedon
Scroll to top