Directed with punch, slickness and a dash of humour by Brad Bird, as demonstrated in his brilliant trio of movies for Pixar (Up, Ratatouille and The Incredibles) and with a top-flight cast, MISSION: IMPOSSIBLE – GHOST PROTOCOL shows there’s plenty of life in this franchise yet.

A neat cameo from Lost’s Josh Holloway (and an amazing stunt) kicks off this film but it’s not long before we’re reunited with Mr Ethan Hunt (or Tom Cruise by any other name), this time doing his ‘Cooler King’ thing from The Great Escape inside a Moscow prison. From then on, we move at a breakneck pace to piece together a new IMF team when things turn bad, thanks to a nasty terrorist of course. 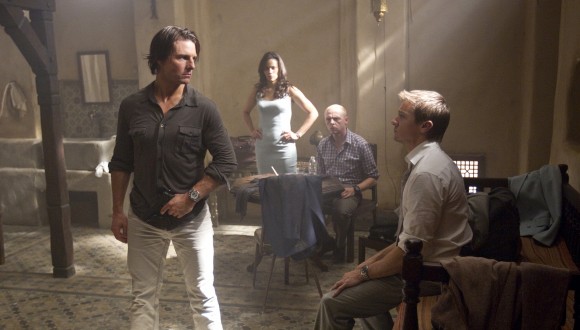 Joining Ethan and choosing to accept this mission is geeky, cheeky IT genius Benji – back for more and now with his field credentials, so really hoping he gets to wear a mask (the ever good value Simon Pegg), along with sassy and feisty Jane (the beautiful Paula Patton). But soon to complement them is someone who is of course more than just an analyst, Brandt (the new Bourne and M:I guy Jeremy Renner).

Unfortunately with this crack group, the baddies don’t get as much of a look in as previous Missions – Michael Nyqvist, who was so wonderful in the Swedish version of The Girl with the Dragon Tattoo, isn’t really called upon to do a lot more than look very mean in a suit, but he does it very well; and Lea Seydoux is an effectively pouty, wicked nemesis to Paula Patton’s Jane. Elsewhere on the supporting cast, I must mention Vladimir Mashkov, terrific in Behind Enemy Lines who here is the dogged, good Moscow cop on the trail of the bad Tom Cruise – or so he thinks.

Jeremy Renner certainly gets stuck into the action “so basically I’m jumping into an oven?!” as a precursor to him potentially taking over the series next time around – or so it’s been rumoured. But he also has to be the ‘Mr Sceptical’, the ‘this is never going to work’ to the mission and all its hair-brained components. It’s set up as a learning curve I guess, so I’m sure the next time out, the training wheels will be off and he’ll be flying.

It’s easy to overlook Tom Cruise in these movies, even though he has the lead role because he’s… well, Tom Cruise but he’s terrific in this, exhibiting all the usual tough-guy stuff we’ve come to know and love him for (the stunt in Dubai is insane) and also getting the opportunity to add in some welcome moody elements to the familiar character – the hoodie helps. Ethan (or Tom really) is a very different man now from the youthful, spiky-haired agent in the first film in the series and he’ll certainly be missed because no one quite does these movies like him.

So thanks Mr Cruise for all the thrills and spills since 1996, it’s been one helluva ride.

Master and Commander: The Far Side of the World rules the waves

Megamind is a megatastic voiced animated treat from Dreamworks

Rian Johnson and Star Wars: The Last Jedi are a winning combination

Star Trek Into Darkness strikes back

Isle of Dogs is a glorious animated creation from Wes Anderson

Blown away by Kathryn Bigelow’s The Hurt Locker again

Let’s hear it for Captain America: The First Avenger

JSHmoviestuff Review of 2011: “Things aren’t always what they s...